Before Oflag 64 in Szubin was opened for American ground force officers, part of them were held in Oflag IX A/Z. The camp was housing 568 British Officers. Most of those had been veterans of France captured in Dunkirk in 1940, but many other campaigns were represented: Greece, Crete, Dieppe, St. Nazaire and the North African campaign. The American contingent arrived at Rotenburg on March, 15th, 1943. It was a rather small camp, containing one three-story building with a small courtyard, which had formerly been a girl’s school (Jakob-Grimm-Schule, founded in 1924, www.jgs-rof.de). 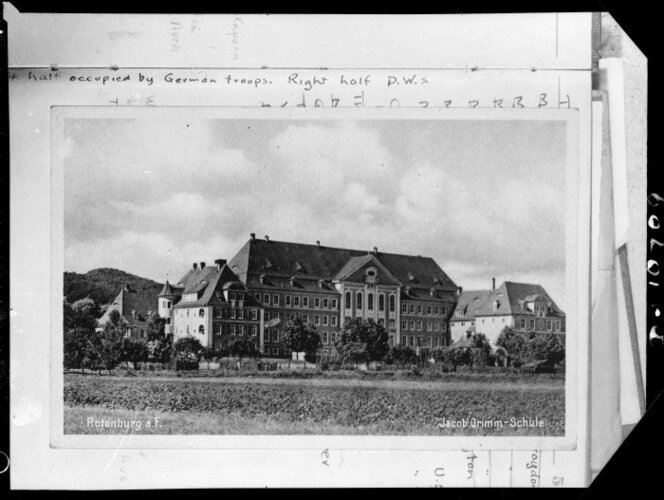 2nd Lt Howard Randolph Holder commemorates the arrival to the camp in his book “Escape To Russia”:

“Our first meal at Rotenberg was fairly good. We had a thin soup, several potatoes, and two or three slices of a kind of sausage. Some of it was blood sausage, which I never learned to eat no matter how hungry I was. (…) Many of the officers shaved for the first time at Oflag IX A/Z. (…). We were able to stay really clean at Rotenberg for the first time. There were fine tiled showers in the basement and it was possible to take a cold shower every day. Warm showers were provided once each week and it were run on a tight schedule which gave each man about six to ten minutes in the shower room. (…) We received our first pay at Oflag IX A/Z. (…). The money we received was not the regular German mark, but a prison camp paper money good only in the camp. This was printed on flimsy paper in a variety of colors, designating different amounts. It was pretty but useless.” 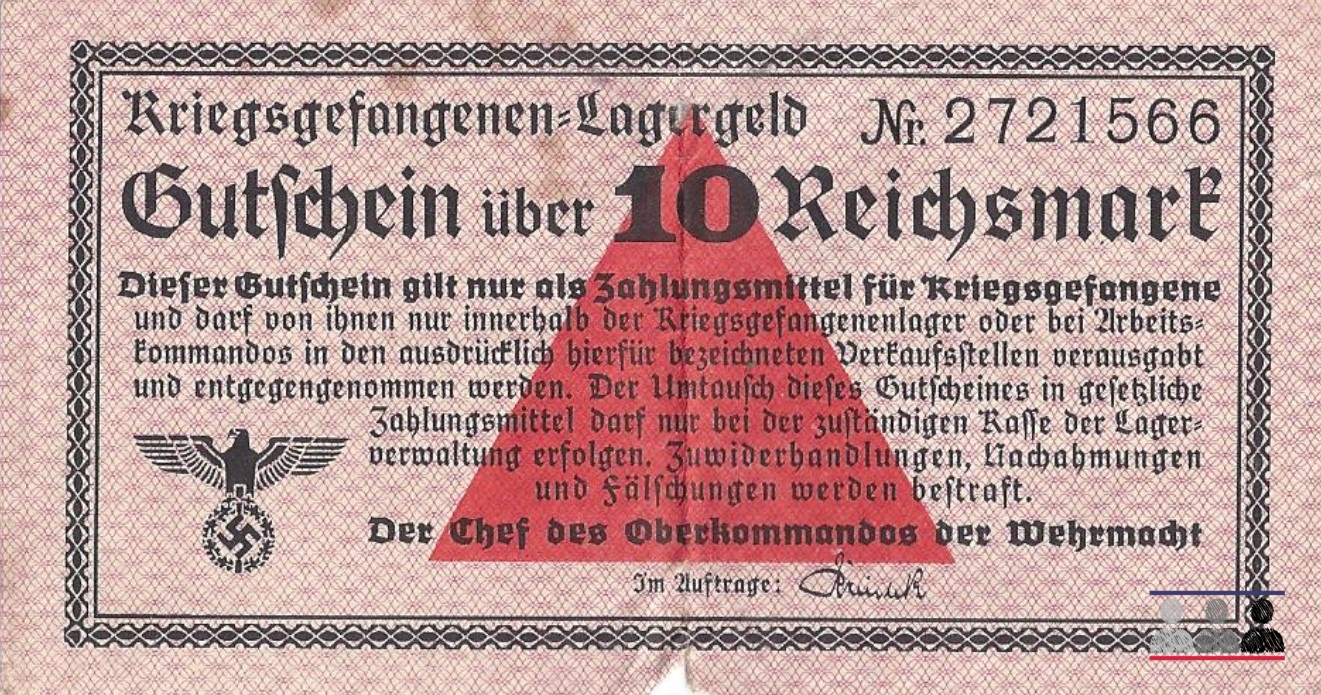 Original Prisoner of War Camp Money from 2nd Lt Seymour R. Bolten'sWWII belongings archive; brought to Szubin by Susanna Bolten Connaughton a year ago, so we had a chance to scan it.

The annotation on Prisoner of War Camp Money as translated in the book by Howard Randolph Holder:
“Prisoner of War Camp Money
Scrip good for 1 [2, 5, 10, 50] Reichmark
This scrip is valid as a legal tender for prisoners of war only, and may be spent by them or accepted only in the specially designated stores inside the prisoner of war camp or at the work camps.
The exchange of this scrip into legal tender can be made only at the authorized cashier’s office of the camp administration. Violation, imitation or counterfeiting will be punished.
The Chief of the German  High Command.
By order: [Signature]”

Very soon the American officers become involved in a variety of camp activities. As can be read in Lu Wilcox’s [Capt. Lumund Wilcox] memories:

“They [British officers in Oflag IXA/Z] were extremely cordial to us and naturally they wanted to know everything that we knew about war and about England, but until they fully investigated each one of us, and interrogated us about the others, they did not tell us anything about themselves or about how they were living in prison life. After they were satisfied that there were no German sympathizers in the groups, they opened up and gave us our first lesson on how to be a prisoner of war and survive. (…) [British officers in Oflag IXA/Z] taught us how to be most comfortable living in a jail. (...). The third category I would place under fun and games. The prisoner of war has nothing but time on his hands. He can sit and worry about himself or he can engage in worthwhile endeavors for his own betterment, or he has lots of ingenuity, he can think of a thousand ways to bedevil his captors to a point of frustration, but never to go beyond.”

“They [British officers in Oflag IXA/Z] staged entertainment every week or so. Goddard [1st Lt. Kenneth H. Goddard*] and Rankin [2nd Lt Robert Rankin*] on drums and trumpet quickly had a fair swing band going with borrowed instruments. They produced an All-American Revue, mostly folk songs and radio humor which was very well received.”
*Both prisoners of war in Oflag 64.

Some of the American Officers were also involved in theatrical productions made by British Officers. Major G. C. “Geoff” Steel, the Englishman, was producing a play which called for three American parts. According to the “Escape To Russia” book, he learned that Howard Holder (the author of the book) was interested in dramatics, so he invited him to rehearsal. The other recruited men were 2nd Lt. John L. Cramer, Jr. from North Braddock, Pennsylvania and Capt. Wilfred “Bill” F. Farrell from Wilmington, Delaware, both also later held in Oflag 64.

“The play was an English farce, filled with slapstick comedy (…) This play was well received, and we had a lot of fun putting it on. We Americans later produced a hurried variety show with less than two weeks for writing and rehearsal which was based on the Hellzapoppin’ theme, ending with a sentimental ditty sung to the tune of “Tea for Two” and dedicated to our friends the British. Thanking them for all they have done for us.”
**Hellzapoppin' – film muzyczny Universal Pictures z 1941 będący adaptacją broadwayowskiego musicalu po tym samym tytułem.

Here are two scenes from “Grouse in June” taken from the“Escape To Russia” book by Howard Holder, with the original caption: Bill Farrell is the tall man in the checked shirt; [John L] Slick Cramer is the man in the suit, holding the gun, and I am the man in the sweater. (The ‘women’ are, of course, other POWs).

The original photographs below were shared by David Glendinning, son of John A. Glendinning. According to writing on the back, these photos show two other scenes from the same production presented at Oflag IX A/Z in April 1943. The other portrait photos present the cast of the play in full stage makeup, and the writing on the back also identified the American POWs who were involved. 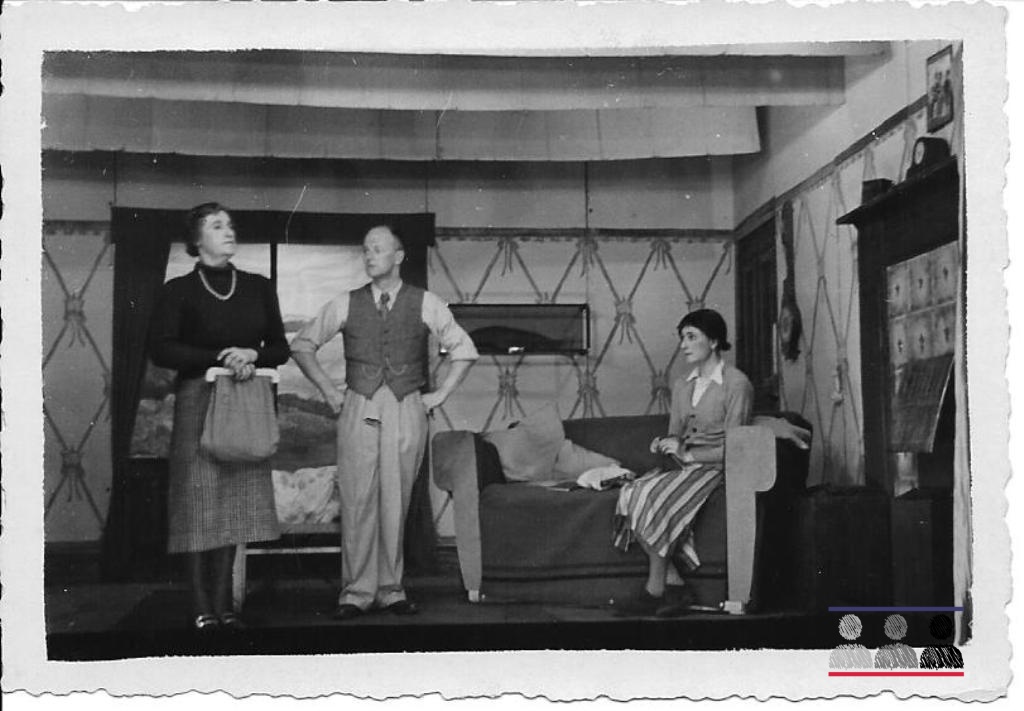 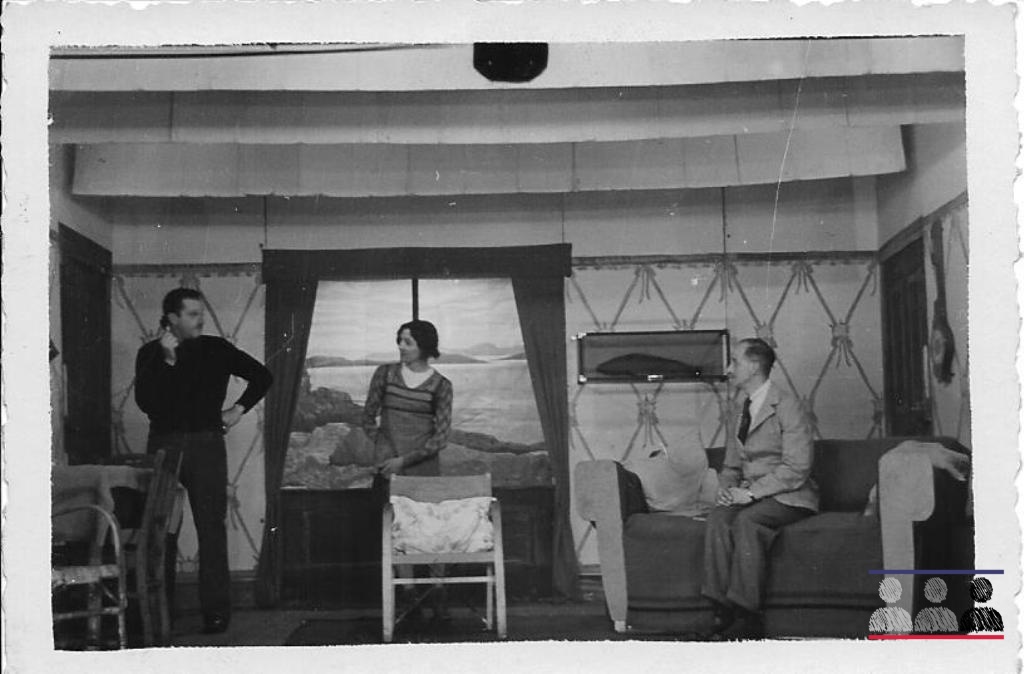 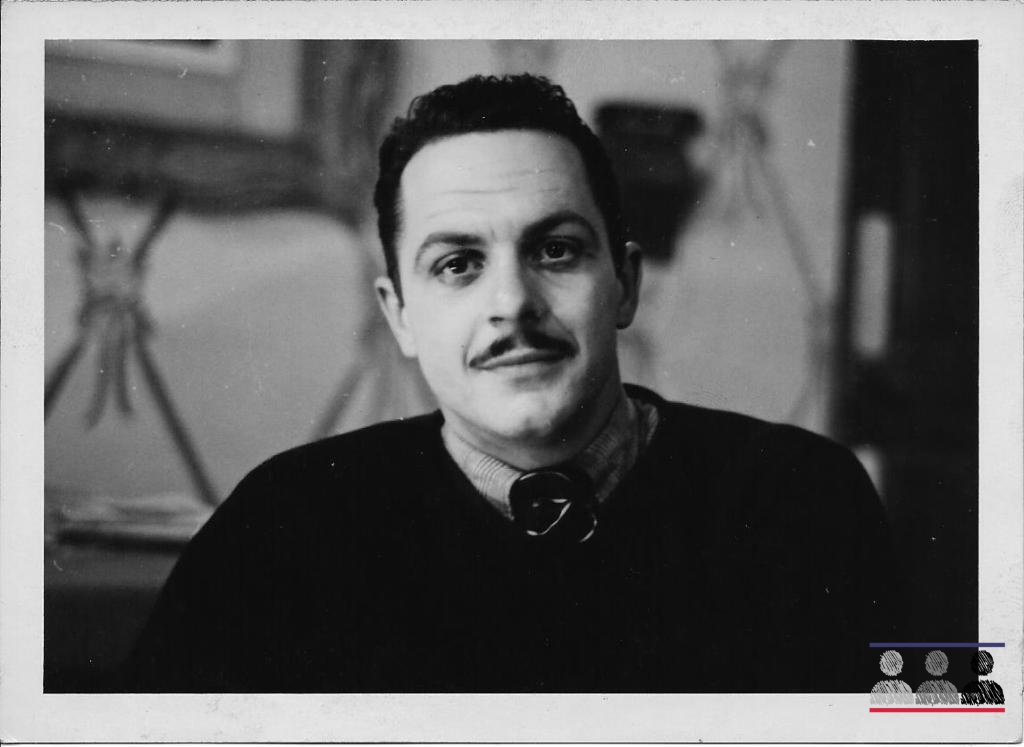 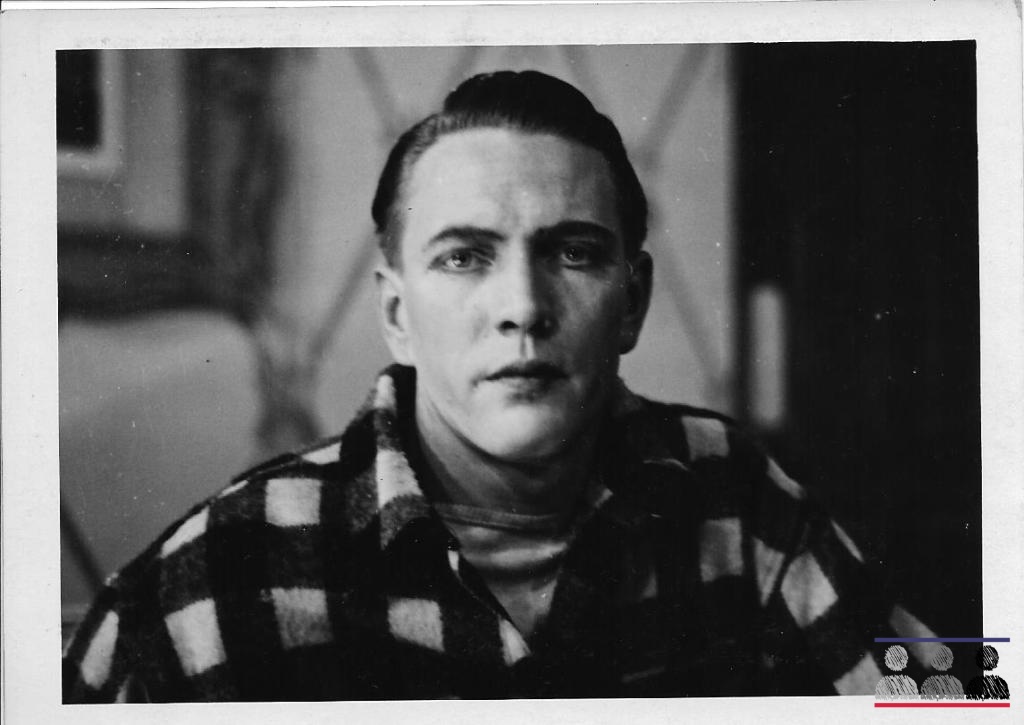 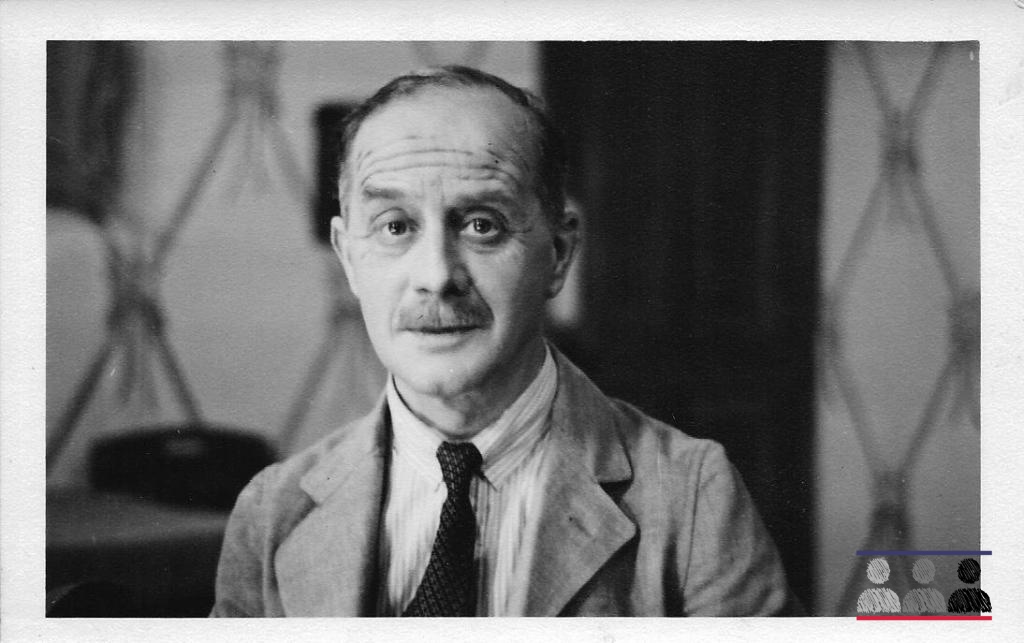 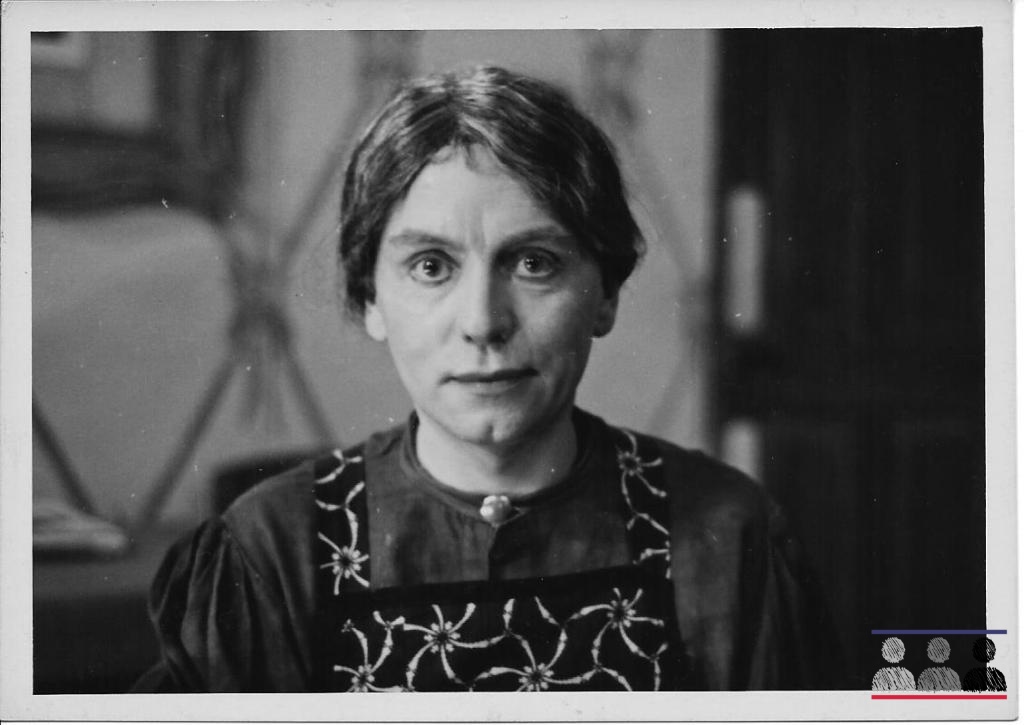 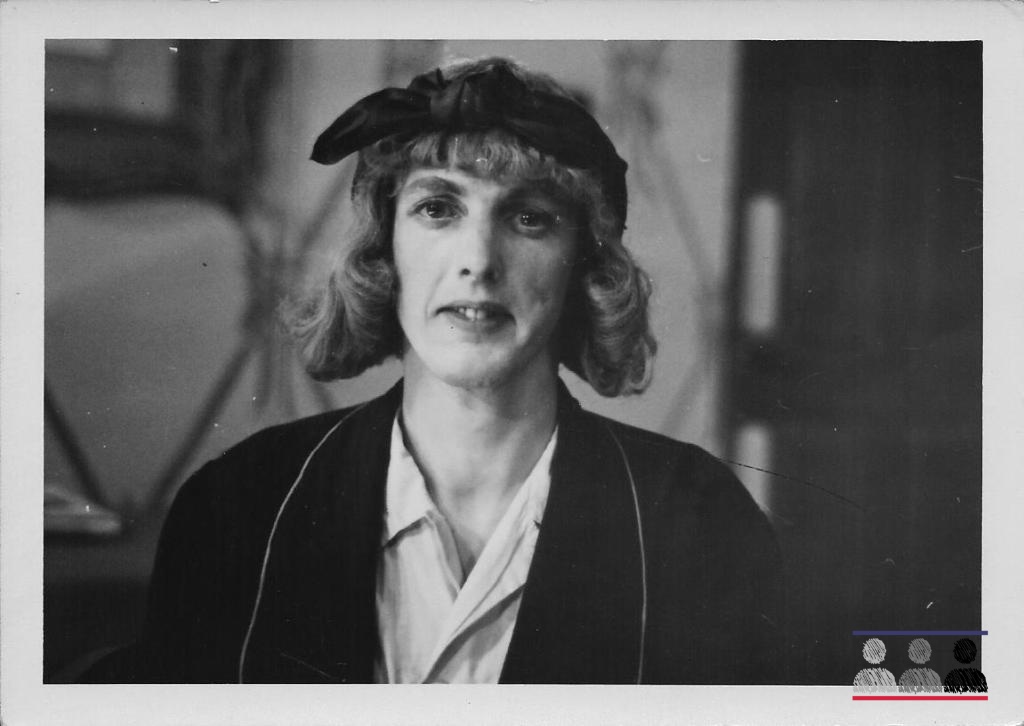 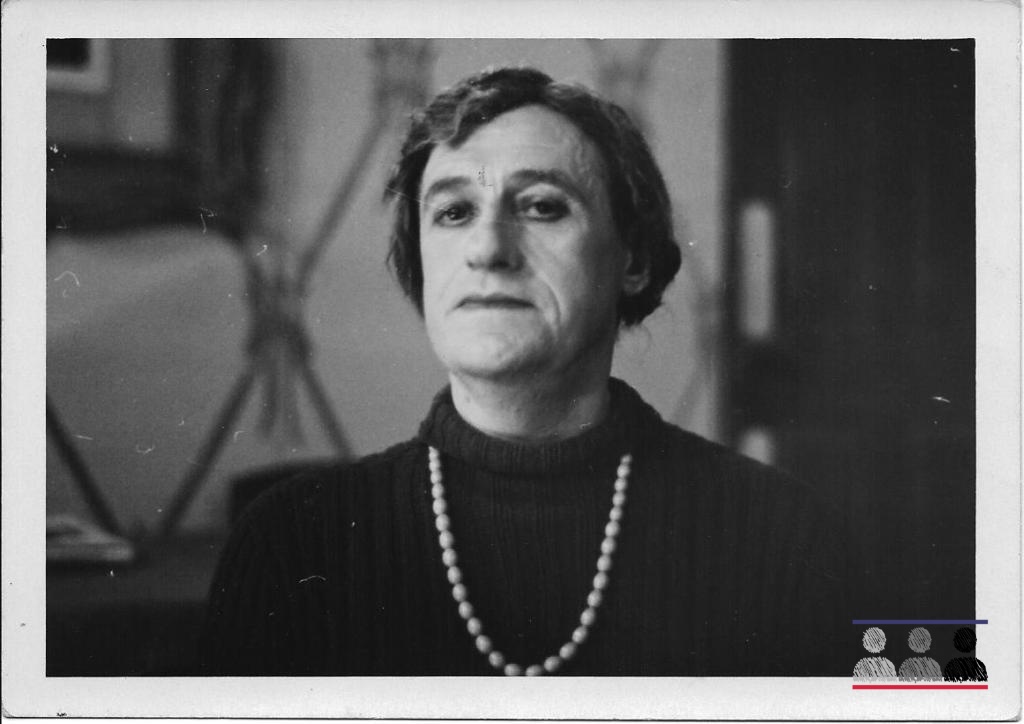