French Regional Exhibition at Oflag XXI B in Szubin, August 1942

August 1942 in Szubin was warm and sunny. Just like the weather, the mood of the 1,500 French prisoners of war at Oflag XXI B was bright. Filled with anticipation and excitement, the POWs awaited the opening of their week-long exhibition, L’exposition des Provinces, about their various regions of France. In addition to the exhibits, almost each day of the week would showcase one or more regions and their own unique dances, songs, and costumes.

Preparations for the event had been underway for a long time. For months, about one hundred POWs worked on artifacts and decorations for the exhibits. For weeks, they rehearsed the dances and songs of their regions.

Perhaps most impressive, the POWs recreated a multitude of traditional French costumes. The costumers not only tailored men's clothes, but also the much more difficult to make women's outfits. With great care and attention to detail, they assembled straw espadrilles, berets, hats and colored ribbons. They sewed colorful skirts, waistcoats, and vests, as well as lace and embroidered headgear, aprons and corsets. The prisoners used the camp’s tailoring shop – which had been part of the campus in the pre-war era when the grounds belonged to a boys’ reform school – to facilitate this formidable and elaborate work.

Events like the exhibition not only served as entertainment. Sports, cultural, educational and entertainment activities like this one aimed to counteract the effects of the monotony of camp life. They distracted prisoners from their poignant longings for country and loved ones. In addition, the cooperative atmosphere formed and strengthened the ties within the camp family.

On Sunday, August 15, at 2:00 pm, German Major Anschutz officially opened the exhibition. An hour later, “Brittany Day” began on the camp sports ground. Dressed in traditional costumes, prisoners danced a gavotte – an old French folk dance – and a derobée – a typical Breton processional dance. The exhibition featured a maritime theme with an emphasis on fishing, and models of ships and boats.  The day included a commemorative photo session. 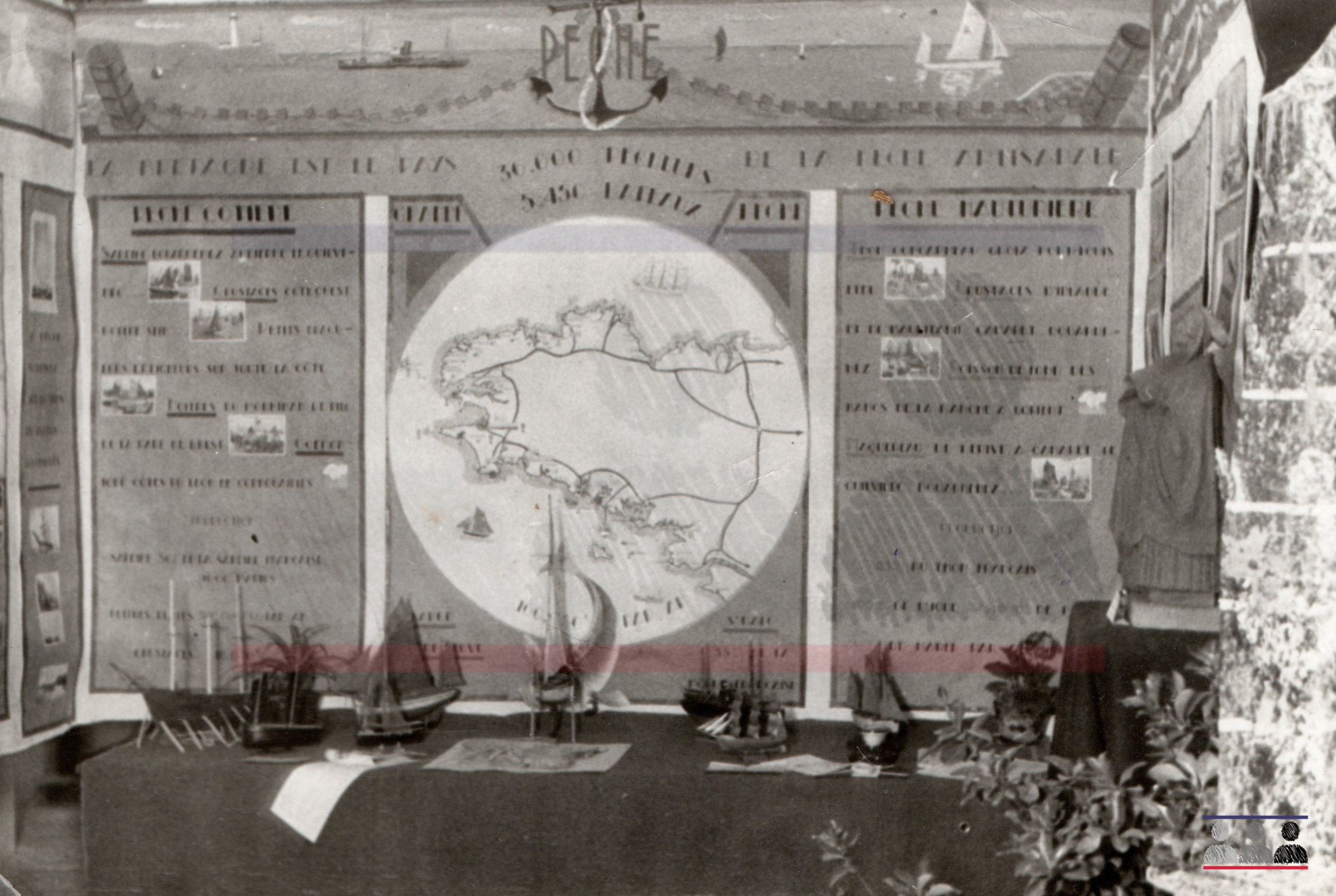 Brittany exhibit at the regional exposition.

The next day belonged to Provence. Performances and activities included singing, the region’s much admired traditional circle dances, and an organized game of boules.

On Tuesday, August 18, Burgundy and Normandy presented together. Unfortunately, during dinner that evening, disturbing news interrupted the relaxed atmosphere and the joyful chatter about the performances: the Germans announced the POWs’ imminent transfer to several other oflags. That night Lieutenant René Millet wrote down in his diary: “What a catastrophe! We got used to life in Szubin so well that we wouldn't ask for anything else but to stay here until the end of our captivity...". 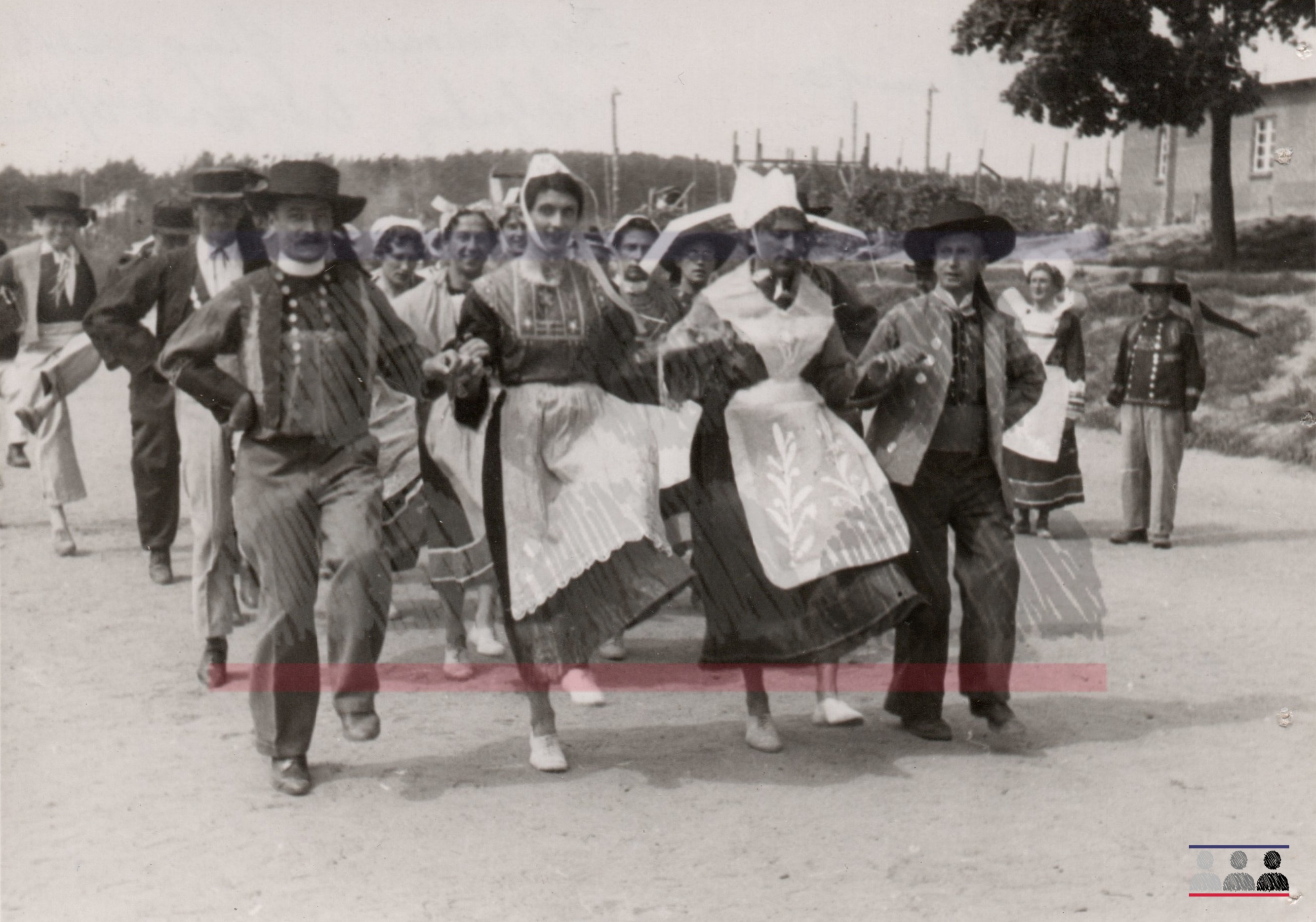 Thursday's show, which was devoted to several regions, probably improved the mood in the camp. Set-up started in the early afternoon. However, most of the preparations focused on the POWs who were to dress as women. These performers layered on their elaborate feminine costumes, and the resourceful POW make-up artists and hairdressers enhanced their looks.

The main attraction was a colorful parade imitating a regional wedding procession. It opened with three prisoners playing a hurdy-gurdy, a violin and a clarinet. Next came twelve pairs of prisoners in women's and men's costumes representing the Limousin, Auvergne and Berry regions. The Gascons, the best represented group, numbered in the thirties. The POW costumers put a great deal of effort into the preparation for the prisoner who dressed as a bride. The effect was splendid. The bride – already tall and slim – wore a light pink dress (white fabric could not be arranged), and the dress’ flattering cut slimmed her down even further. The bride also wore a wide festive cap on her head, typical for the Limousin region, and an impressive embroidered white scarf.

However, the day’s fun was mixed with preparations for the approaching departures. That day, the Germans notified the prisoners of their new camp assignments. Worry mingled with the hope of being transferred to camps closer to the mens’ longed-for home country. The most desirable destination, probably due to its proximity to France, was Oflag V A Weinsberg. The least desirable was Oflag II B Arnswalde (Choszczno) which did not bring the French prisoners much closer to their homeland. The POWs sorted through the belongings they had accumulated over the past months and packed, and the Germans allowed them to send what few extra belongings they had via parcel to France.

On Saturday, August 22, the Basques presented their exhibition. Sturdy men danced with with skillful lightness and grace. They were accompanied by an orchestra consisting of an accordion, saxophone, flute, two pairs of violins, a trumpet, Basque drum, tambourine and castanets. The high and quick style of the Basque dancers made the prisoners think of whirling devils. The performance was a huge success.

On Sunday, the Nord region distinguished itself with its grand parade of musicians, dancers, gymnasts, disguises, a hunting group and a well-run choir. On that day the L’exposition des Provinces concluded.

For a long time, if not forever, the fond memory of the Exposition remained with each of the French officers. It would be the last such big and joyful event they all shared. Five days later, on Friday, August 28, 1942, the Germans began the relocations of the French POWs of Oflag XXI B to at least seven different oflags outside the 21st Military District. 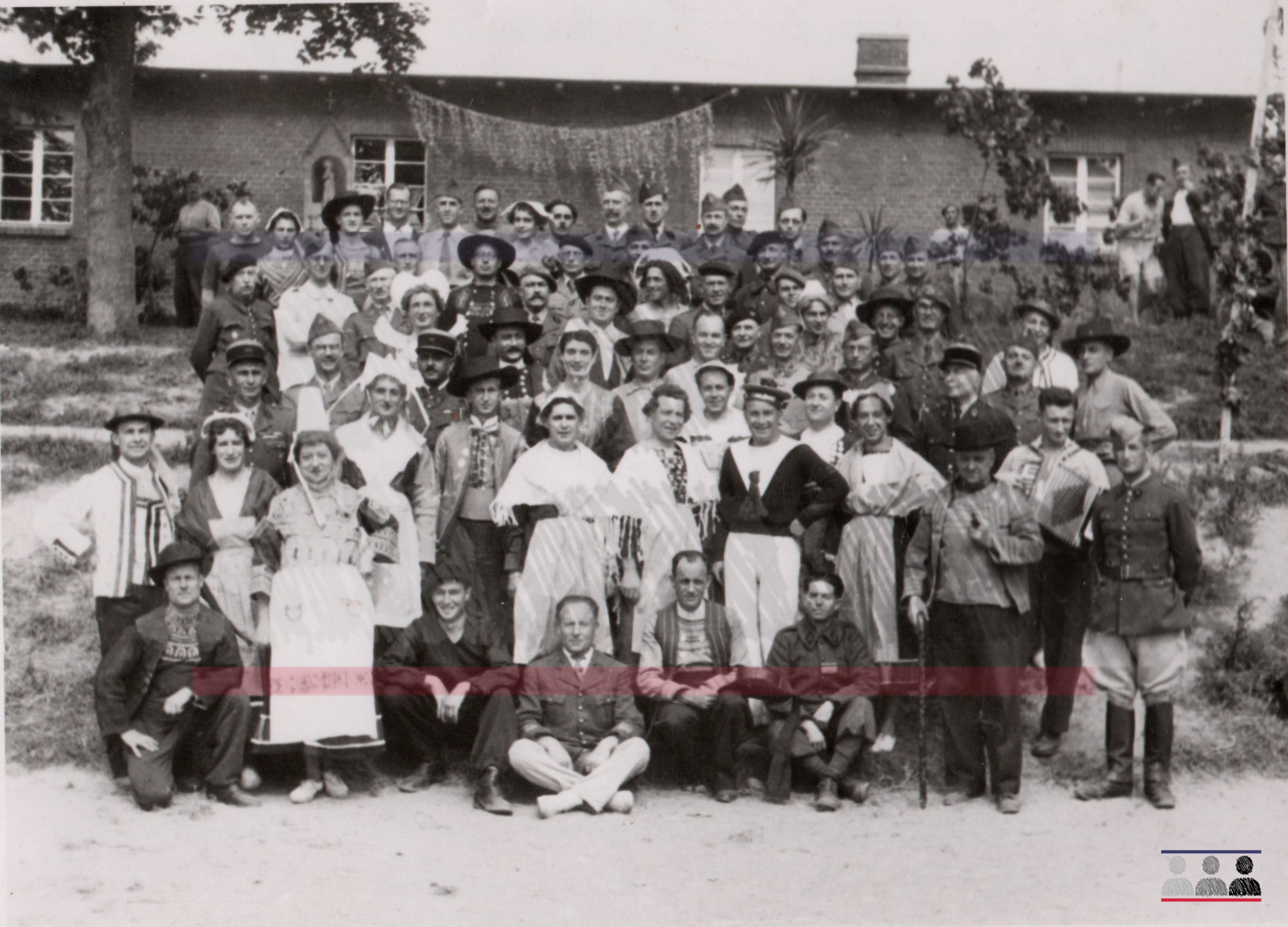 A group of POWs in a commemorative photo taken during Brittany day.